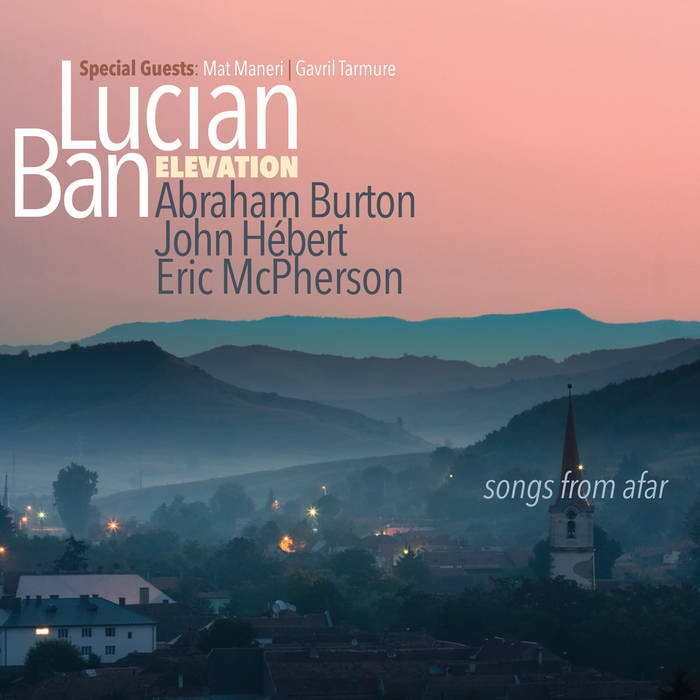 Streams of influence from the past and cultural identities sometimes merge with one’s quest for forms of expression. "Songs From Afar is very personal for me because the album is intimately tied to my Romanian cultural heritage and to the jazz influences that help me find out more about where I come from – and where I’m going. It's not only the ancient Transylvanian folk songs that we approach in this recording, it's also how the other pieces and improvisations reflect the constant search for musical meaning," notes Transylvanian expat pianist and composer Lucian Ban talking about his second album with Elevation quartet (and his third album on Sunnyside).

"Long the night and I’m awake/ What may happen to poor sleep/ If I lay down sleep on sleep/And one night sleep all of it" are the lyrics of an ancient folk song passionately sung by Gavril Tarmure in the opening number - the beauty of this rare and timeless song that has been passed on for generations comes to life in Lucian Ban's arrangement of “Transylvanian Sorrow Song” where the singer is accompanied by the ardent commentary of Burton's saxophone and the band's spiritual modal jazz, setting the mood for the entire album.

Elevation has been a working ensemble for many years. Ban has had a long relationship with Burton, a muscular tenor player out of the Coltrane mold. The rhythm team of Hébert and McPherson has become one of the best in jazz, being heard with Andrew Hill and Fred Hersch, among many others. For the recording, Ban invited his friend and collaborator Mat Maneri to join the ensemble. Maneri’s very personal and intuitive style fit the music perfectly, adding a sound that relates to the folk tradition but through a very modern filter. The musicians display a comfort with each other that is immediately discernible in their tremendous interplay and they utilize their fantastic musical rapport and style to delve further into musical heritage.

Following the opening number, the introspective “Farewell” is a spare and lilting composition, a ballad that reflects Ban's inspiration in late 19th century Wagnerian chromatics and highlights the sensitivity that the ensemble can display. “Travlin’ with Ra” echoes the mystery, openness and blues sensibility of the intriguing personality and musical mystic Sun Ra while the first solo piano improvisation “Solo for a Brother with Perfect Timing” is a touching tribute to Abdullah Ibrahim, one of Ban’s notable influences.

The second folk piece sung by Gavril Tarmure with the band is a Transylvanian wedding song arranged in two versions on the album - one by the pianist and one by the bassist. Hébert’s rendition of “Transylvanian Wedding Song I” is a brisk sprint with fantastic, searing contributions from Burton and Maneri.

Ban’s “Chakra, The Island” captures a film noir cinematic feeling but with warmth and passion. “Spiritual (For HJ)” is inspired by the late, great Hank Jones’s duo work with the recently departed master Charlie Haden, and is lovingly wrought and masterfully played by this highly attuned ensemble. Ban’s rendition of the “Transylvanian Wedding Song II” is a stripped down and affecting arrangement of the gorgeous piece, which allows Tarmure‘s vocals to really shine. The subtle swing of Ban’s “Southern Dawn” is a wonderful vehicle for Maneri and Burton’s expressive dialogue in blues. The program ends with the second piano improvisation of the album, “Teaca, A Song From Afar,” a heartfelt solo performance named after Ban’s childhood Transylvanian village.

Lucian Ban’s recent reinvestigation of his musical influences and cultural heritage distilled through the masterful contributions of his Elevation ensemble has created a powerful brand of modern jazz. Songs From Afar represents two traditions, two musical worlds, and many musical elements coming together to fashion a unique identity that truly spans continents and styles.

Bandcamp Daily  your guide to the world of Bandcamp